It’s perhaps hard to believe, but only half a century ago the choices of wedding ceremony available to marrying couples were very limited indeed – you either headed to your local Church or other place of worship, or to the Register Office.

Today, in England and Wales, we can add the introduction of licensed venues, civil partnerships and same-sex marriages to this list – but there is one other form of ceremony which is inexorably gaining more and more attention – Humanist Ceremonies.

Between 600 and 900 Humanist ceremonies were conducted in England and Wales in recent years, so we here at The Wedding Secret thought we would share our experience and knowledge of Humanist Wedding Ceremonies, along with featuring the wedding of Ruth and Simon, who enjoyed a very special ceremony led by a Humanist Celebrant back in July 2011.

Where better to start explaining Humanist wedding ceremonies than by giving an example of one? These images have been supplied by an in-house photographer :) 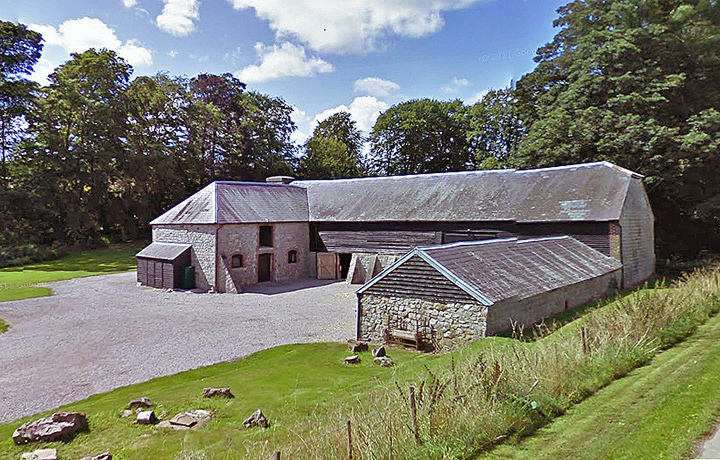 The fulfilment of Ruth and Simon’s marriage celebrations began in the first week of July 2011. Like many other couples who decide to marry in a Humanist ceremony in England, their first port of call was their local Register Office. After legally tying the knot at Lewisham Register Office in South London, it was time to prepare for the big event the following week.

Over to their wedding venue, Wick Bottom Barn, found deep in the stunning Wiltshire countryside just north west of Marlborough, a mere stone’s throw away from significant prehistoric sites such as Barbury Castle, the site of an ancient Iron Age Hill Fort, Silbury Hill and the Avebury Stone Circle! 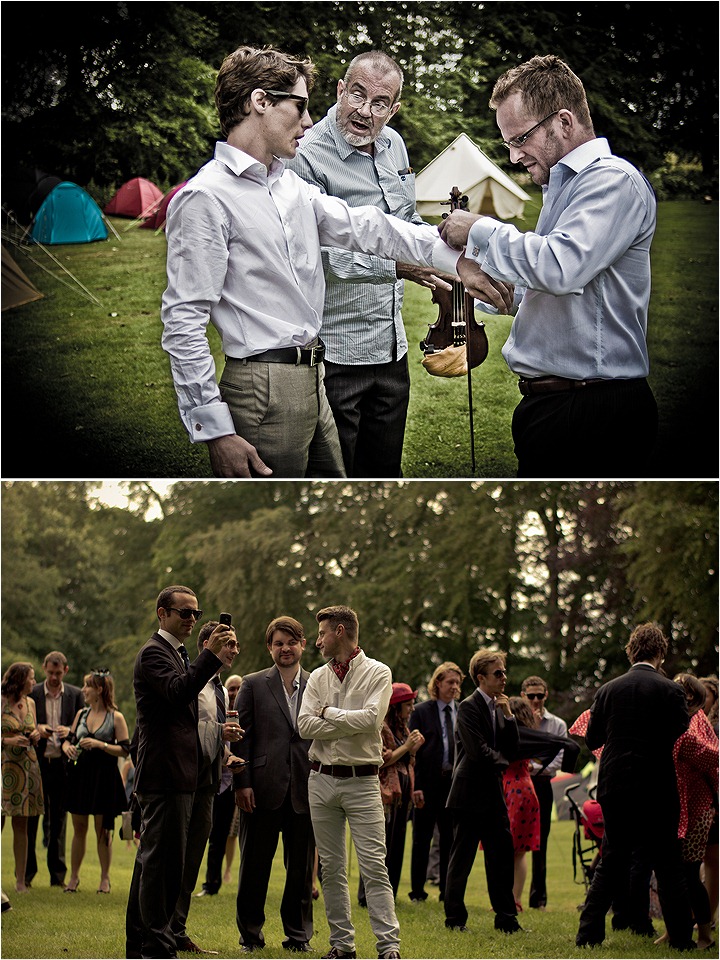 Their chosen venue was one of those ‘off-the-beaten-track’ types, little known except to locals and those with a patient and persistent eye on Google! A complete blank canvas, the couple with their families and friends transformed the stone-built barn and its enclosed grounds into a fully-functioning wedding venue, complete with catering equipment such as fridges, freezers, tables and chairs, PA and lighting equipment, and plenty of space for camping!

The day’s proceedings kicked off around 2pm with the ceremony, led by Humanist Celebrant Neil Taylor. Trained and accredited by the BHA, Neil commented that the wedding was:

– prior to the big day, Neil was in detailed correspondence with Ruth and Simon, developing their bespoke outline for the ceremony.

The script was adapted from a number of templates that Neil had at his disposal, and free of any legal or religious requirements, they were able to craft a completely personal series of vows etc. 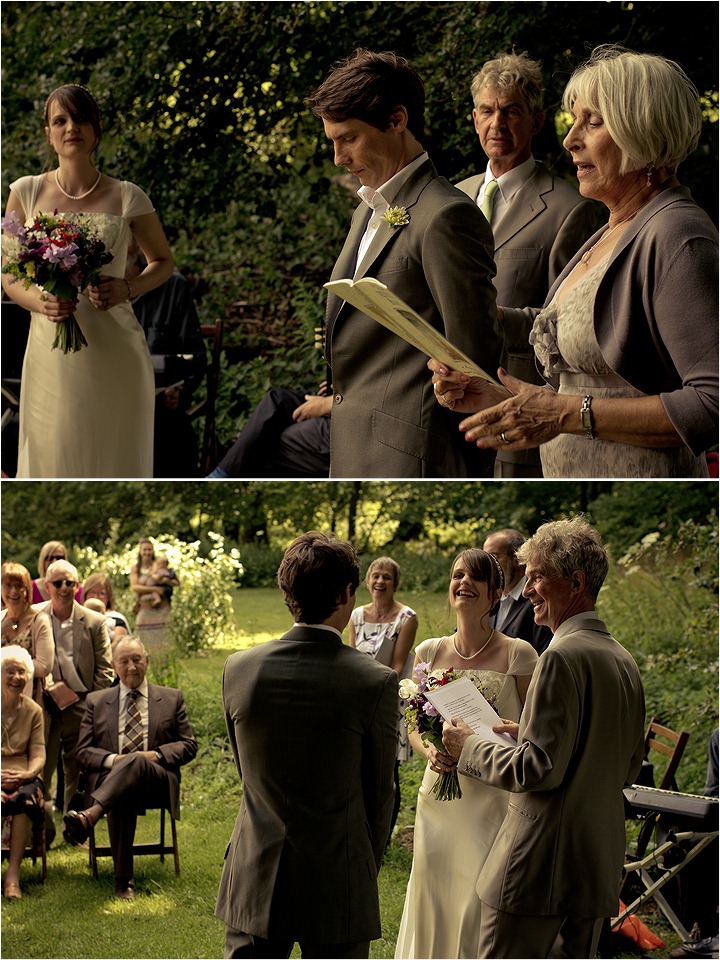 After the ceremony was over, the reception got underway, featuring freshly-prepared cuisine, live music of various styles throughout the day and late (very late) into the evening. The night ended with hitting the hay in tents put up by the guests themselves, the camping experience made all the more manageable by a small block of showers and toilets nearby, and a BBQ breakfast the next morning!

Ruth and Simon sourced their gorgeous flowers from The Walled Garden At Mells – an amazing and unique English garden west of Frome which exclusively grows seasonal native flowers. A local florist selected and cut the flowers from the garden and arranged them to match Ruth and Simon’s sweet pea colour scheme.

Adding to the simple country-style wedding theme, they sourced blue glass bottles in varying colours and sizes and filled them with hedgerow flowers, which made an excellent series of centrepieces for the tables. 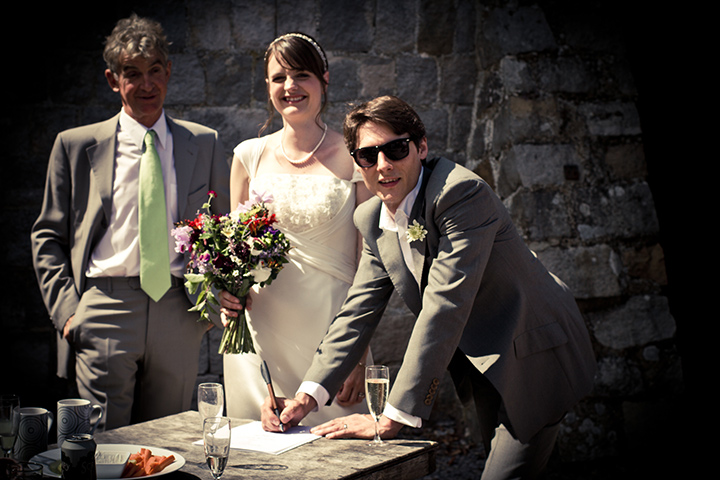 Why a Humanist Ceremony?

Besides the fact that their chosen reception venue didn’t possess a civil wedding ceremony licence, Ruth and Simon wanted to have their ceremony led by a Humanist Celebrant because they felt that humanism suited them ideologically, and gave them the freedom to do what they wanted on their very special day.

Not being religious or churchgoers themselves, they also felt uncomfortable at the prospect of tying the knot in a conventional religious context.

All about planning your own Humanist ceremony

So if the ceremony of Simon and Ruth strikes a few (wedding bell) chords with you, then we’ve put a little information together to help you out with the basics and practicalities of planning your own Humanist wedding.

What is a Humanist ceremony?

Those who don’t feel comfortable with the conformist aspects of a religious wedding have the option to legally marry by conducting a ‘civil ceremony’ (and have done since the 19th century) and those who want total freedom have the further alternative of holding a Humanist ceremony.

In essence, Humanist Ceremonies present a simple way to allow each couple complete freedom and control over this central part of their big day – whilst focusing on shared human values rather than traditional religious aspects.

“For those of us with no religious belief it’s important that we can mark these occasions with honesty, warmth and affection, using words and music that are personal and appropriate to the lives and the people involved” – The British Humanist Association (BHA) 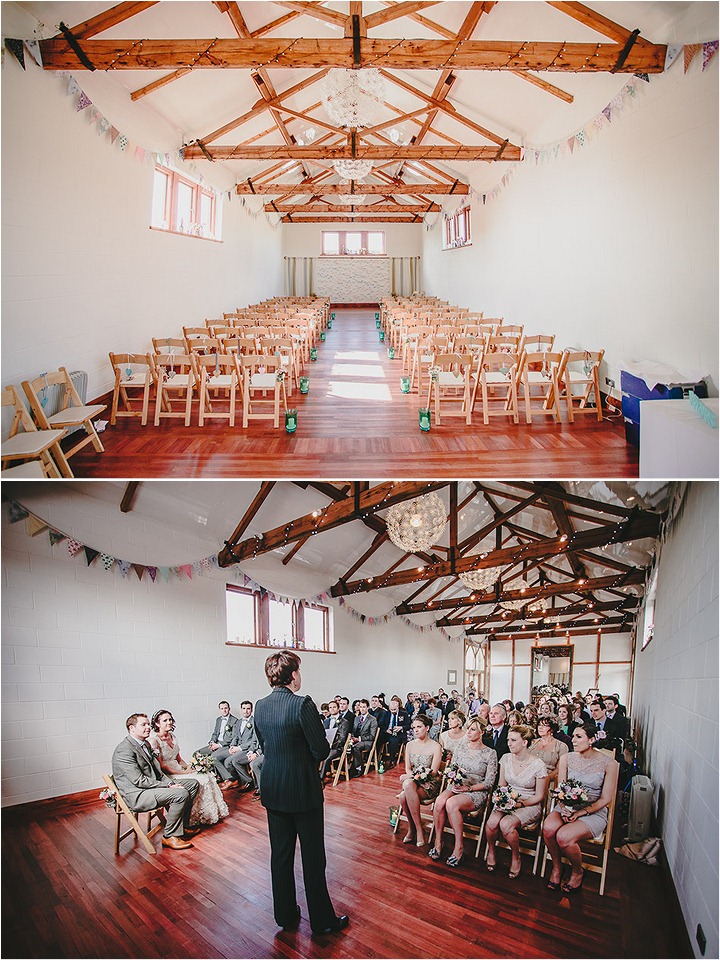 One of the major plusses for choosing a Humanist Ceremony, besides the aforementioned freedoms, is the opportunity to conduct the main part of your ceremony outdoors!

A Humanist Celebrant, who in most cases is an officiant trained by the British Humanist Association and authorised to carry out Humanist Ceremonies, including weddings, funerals, memorials and naming ceremonies (the equivalent of Christenings), will conduct and lead proceedings.

Independent celebrants (those not associated with the BHA) do also operate – but they are much harder to come by! 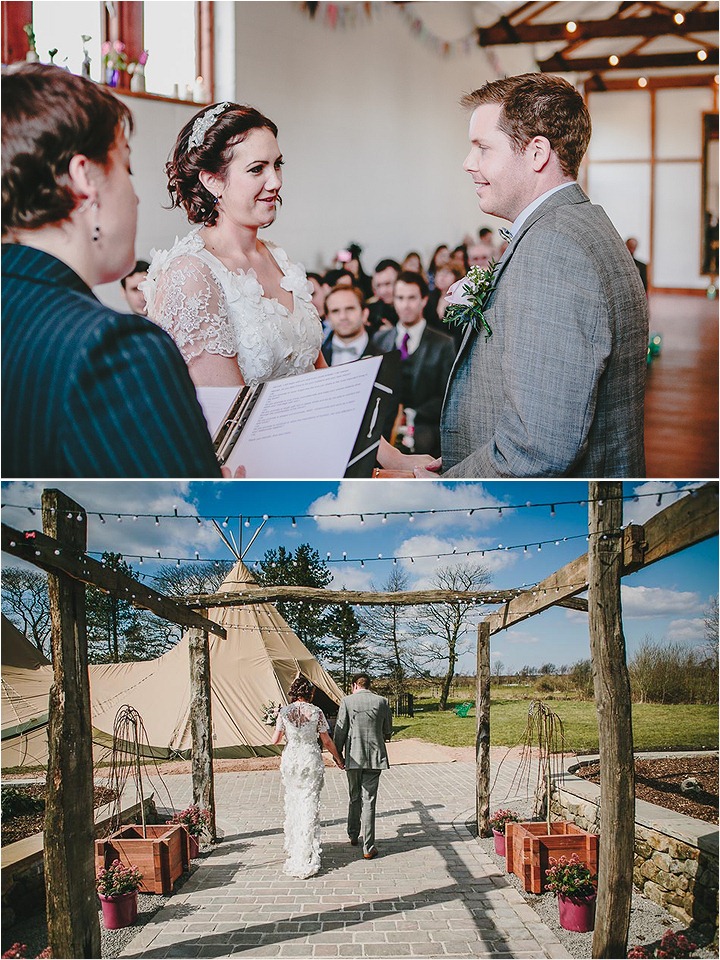 For this, let’s ask Ruth and Simon again:

“We found Neil on the British Humanist Association’s website, as they provide a list of BHA-accredited celebrants by region, on a map, and also provide a postcode search function for your venue…”

But what about selecting the right celebrant for your day?

“We had a small number of celebrants in mind in the local area. We decided to go for Neil as we felt like he suited our personalities, and enjoyed his more formal (yet relaxed) approach compared with the others.”

Make sure to check credentials and experience too – they are important factors towards the smooth running of your big day.

Where can I hold my Humanist Ceremony?

Pretty much anywhere is the simple answer.  As long as you have permission from the owner of the property, Humanist weddings have been known to take place on the tops of hills, in forests, on beaches, in gardens and even in people’s front rooms if that’s what they want! 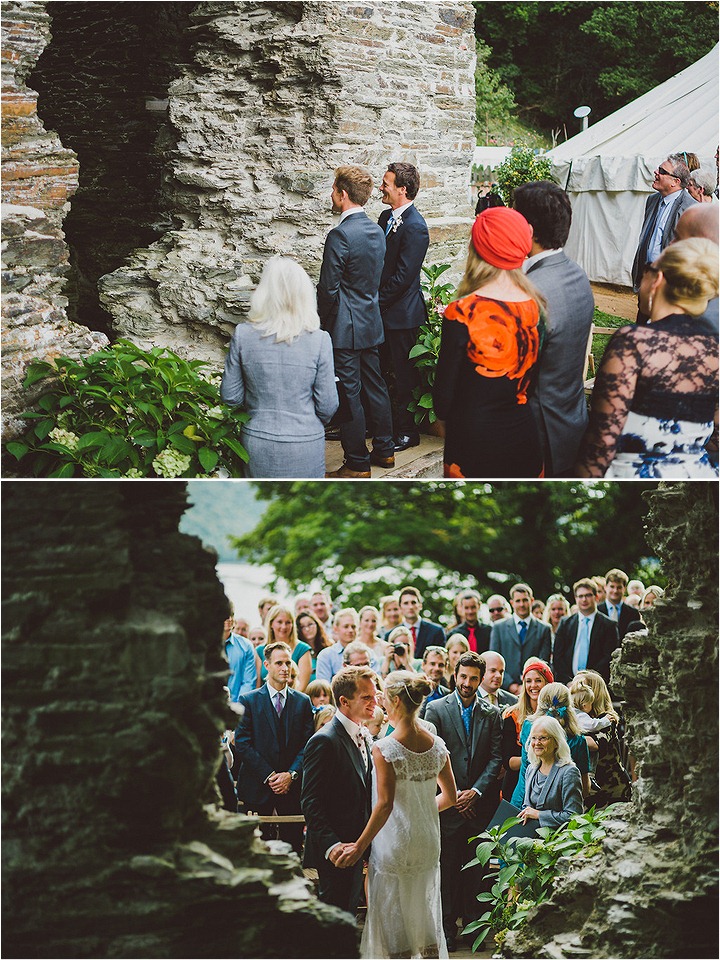 How much does it cost?

Rather than paying the Government or an appropriately-licensed venue a fee for the right to perform your ceremony, you only have to pay your Humanist Celebrant his or her fee.

The BHA sets out guidelines for what their accredited celebrants should charge, and in the case of wedding ceremonies, this is:

The fee will vary between these amounts depending on local competition and the complexity or duration of your ceremony – check with the celebrant you have in mind to get an exact figure. In a situation where your preferred local celebrant is unavailable on your chosen wedding date and you have to source an alternative from further afield, you may have to pay travel and even accommodation costs.

At the time of writing, standalone Humanist Ceremonies are not recognised as legal marriages by the Government of England, Wales and Northern Ireland.

You must attend a Register Office or licensed civil marriage venue and gain a civil marriage certificate – a ceremony in itself which centres around ‘the legal parts’ of the procedure. 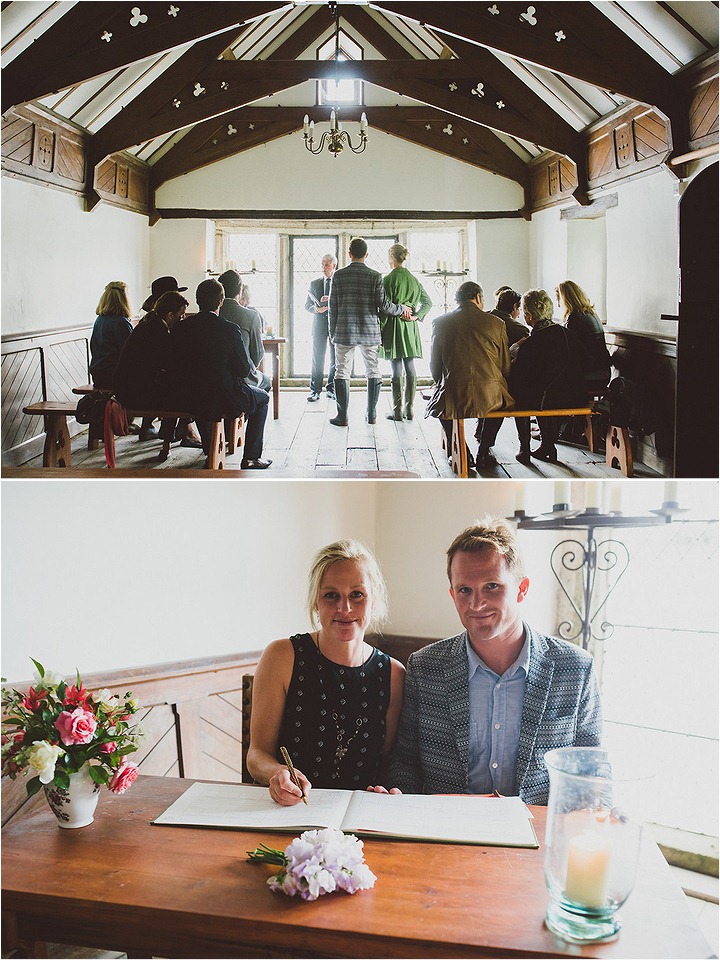 Couples who marry in Humanist Ceremonies often prefer to keep the legal civil ceremony as minimal as possible, so as to make their main Humanist Ceremony more special. This is known as a Registration, and you could invite only a few close members of the family at this stage to act as witnesses.

First of all, you need to give 16 days’ notice of your intention to marry at your local Register Office.

After the 16-day period, all that is required from the ceremony itself is that you exchange formal wording, including:

A ‘Declaratory’ phrase (“I do solemnly declare that I know not of any lawful impediment…” etc.)

Your Local Authority can provide you with the exact wording – you will be given a limited choice of phrases which cannot be adapted or altered.

These civil wedding ceremonies require a minimum of 2 witnesses.

This is followed by the formal signing of the marriage register or civil partnership document. You are now legally married (or partnered) and can continue to hold your Humanist Ceremony. You don’t need to exchange vows or rings.

Although you can carry out this form of minimal ceremony in an appropriately-licensed wedding venue, most couples prefer to do it in a Register Office due to the fact it is a great deal cheaper (£45+£4 for the certificate).

Some couples like to do this on the same day (the morning or early afternoon), and others (like Simon and Ruth) on a completely different day to their Humanist Ceremony.

If you do decide to hold both the legally-binding part of your ceremony and your Humanist wedding in a licensed venue, then do be aware that both your local Registrar and the Humanist Celebrant must be present – the celebrant is not authorised to carry out the legal aspect. However, in this format you may well be able to organise a seamless transition between registrar and celebrant. 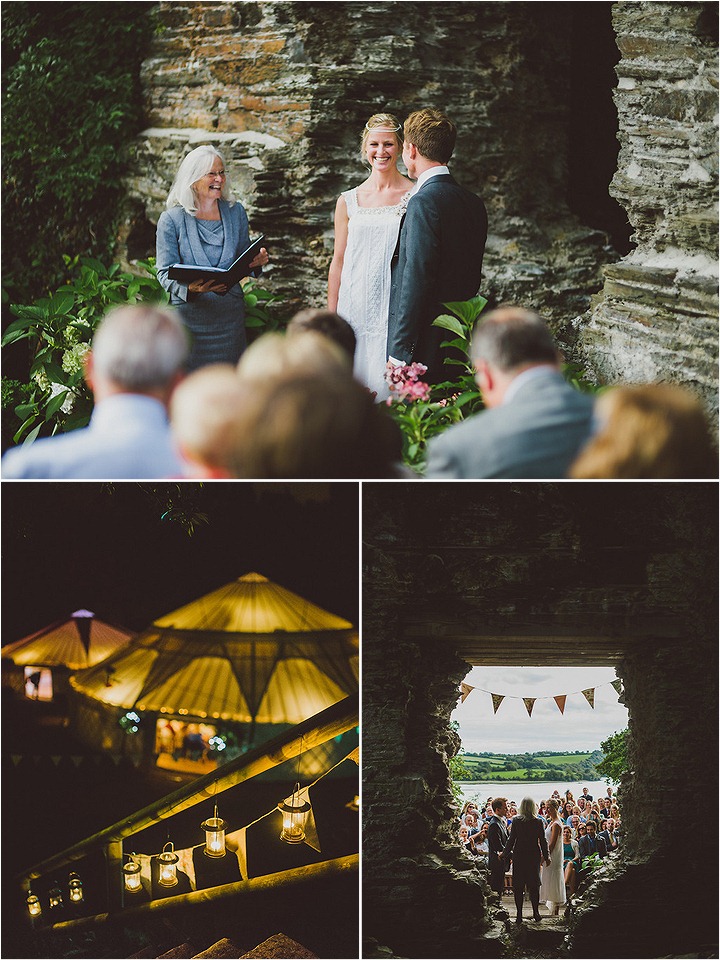 Does my wedding have to be non-traditional?

The freedom of Humanist Ceremonies means you can do whatever you want! So aspects of a traditional ceremony such as the procession up the aisle, the father ‘giving away’ the bride or the exchanging of rings are more than welcome – equally you don’t have to include them either!

The vows and other words spoken during your Humanist Ceremony are completely up to you – there are no requirements, although your celebrant can recommend suitable vows if you are struggling. In the case of Ruth and Simon’s wedding described earlier in this article, their celebrant provided a suggested template script which they adapted to suit their preferences and match their personalities.

Scotland is one of only 7 countries in the world which allow Humanist celebrants to conduct legally-recognised civil wedding ceremonies. In fact, civil ceremonies conducted by Scottish celebrants, registrars and humanists alike, may be carried out anywhere deemed as an ‘approved place’.

So there we have it! Humanist weddings essentially offer more control over the content of your ceremony, free of legal and religious constraint. They allow you the freedom to hold an extremely personalised wedding ceremony, along with family and friends, in pretty much any location to which you have access – the only downside is that you will have to also undergo a separate civil ceremony in order to be recognised as legally married.  You can easily find a local Humanist wedding celebrant by using the BHA’s efficient search tool.

Our guide to handfasting and pagan weddings

Legal Aspects of a Civil Ceremony (for before your Humanist Ceremony) – https://www.gov.uk/marriages-civil-partnerships/overview

Captioned images were provided by:

What is The Wedding Secret?