Ever wondered how popular weddings have been over the last few years? How about comparing that to weddings over the last 100 years? Well we’ve been working hard breaking down the very latest marriage statistics to come out of the UK – and this is what we found.

Highlights of The Analysis

We have gathered and combined statistics for England and Wales, Scotland and Northern Ireland – courtesy of the ONS from various years – the most recent uses provisional data from 2012 (the latest available statistical year) which you can see in the ‘Marriage Trend’ section (only). The rest of the graphic features statistics from 2011, as further information (such as 2013 and 2014) have not been made available at the time of writing for England and Wales. The 2013 data for Scotland and Northern Ireland have been made available. 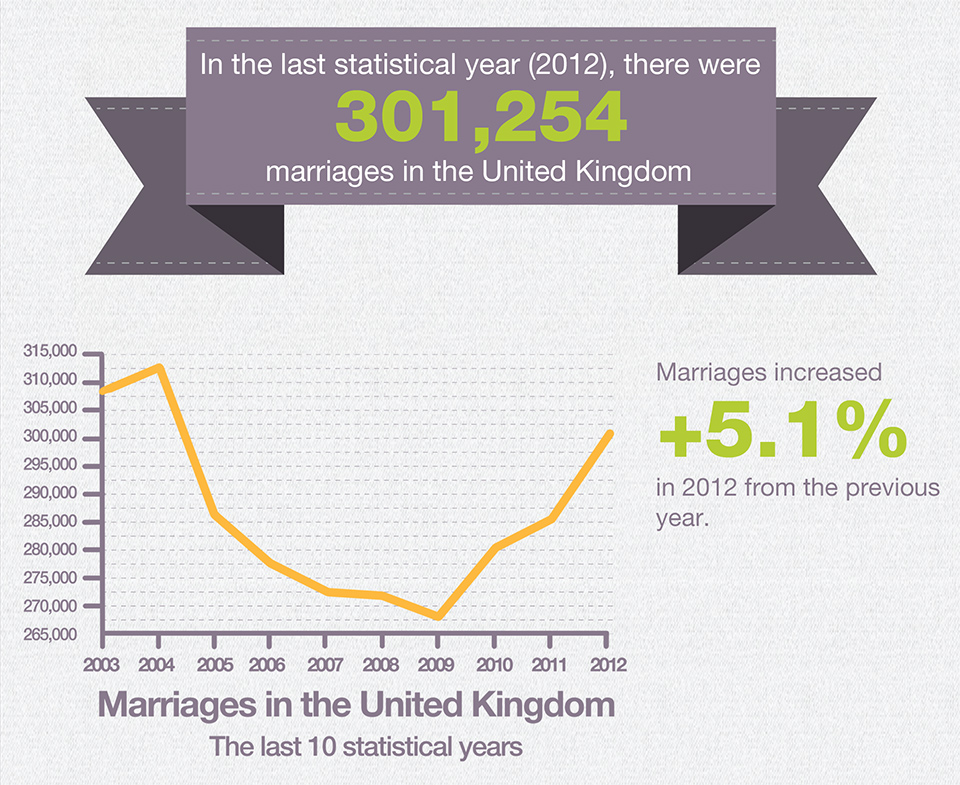 It’s likely that this all-time low dip was influenced by the recent recession in the UK, which lasted from 2008-2009.

Is the recent increase influenced by our recovery from the recession? Or are there more intricate social influences at work here? Let’s take a look at the history of marriages over the last 100 years.

The 100 Year Marriage Trend in the UK

We’ve covered a lot of this section in our previous, England and Wales 2013 infographic analysis article, so considering this data has not changed, and it’s very similar to the UK’s data, take a look for a more in-depth breakdown of the socio-economic journey that marriage records highlight, here.

In the meantime, here’s a quick summary of marriages in the combined countries of the UK over the last 100 years. 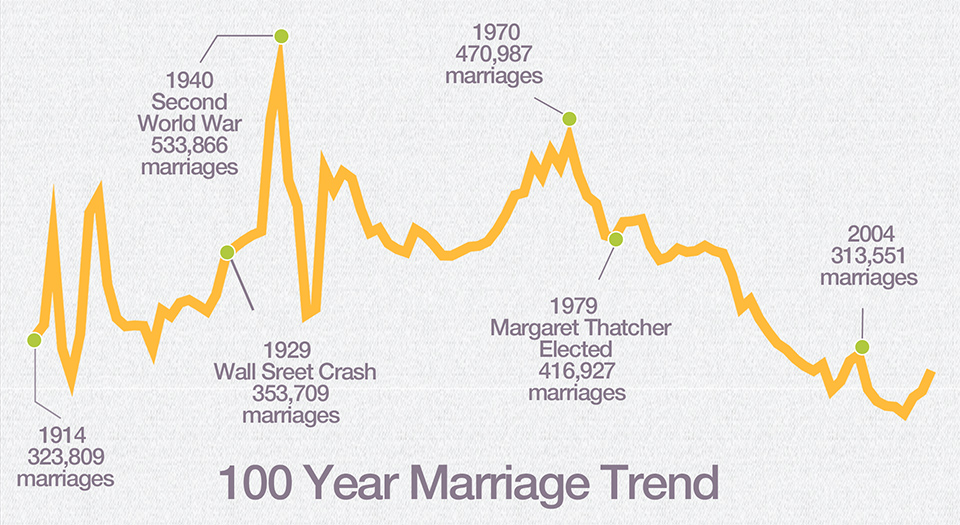 World Wars – There are clear peaks post and pre-World War I and World War II on the chart below. This is due to the desire at the time to marry considering the extreme circumstances, and also to the large number of foreign soldiers (US and Canada) temporarily residing in the country!

There are periods in the 1960s which have large peaks in marriages. This is partly down to the population boom post World War II (in turn thanks to the many marriages during and after the war). This is backed up by the fact that the average age of marriage during this period is around 24.

The 80s onward sees a gradual downward trend of marriages until the present day.

Analysing the latest available (2011) regional data for marriages in the UK brings up some interesting results indeed.

Bear in mind that we have interpreted the data in terms of marriages per capita of population (1000). This helps us see a fair representation that is not skewed by large populations (there were 31,726 weddings in the London region in 2011 for example – but considering its population, 8 Million, that is not too much!) 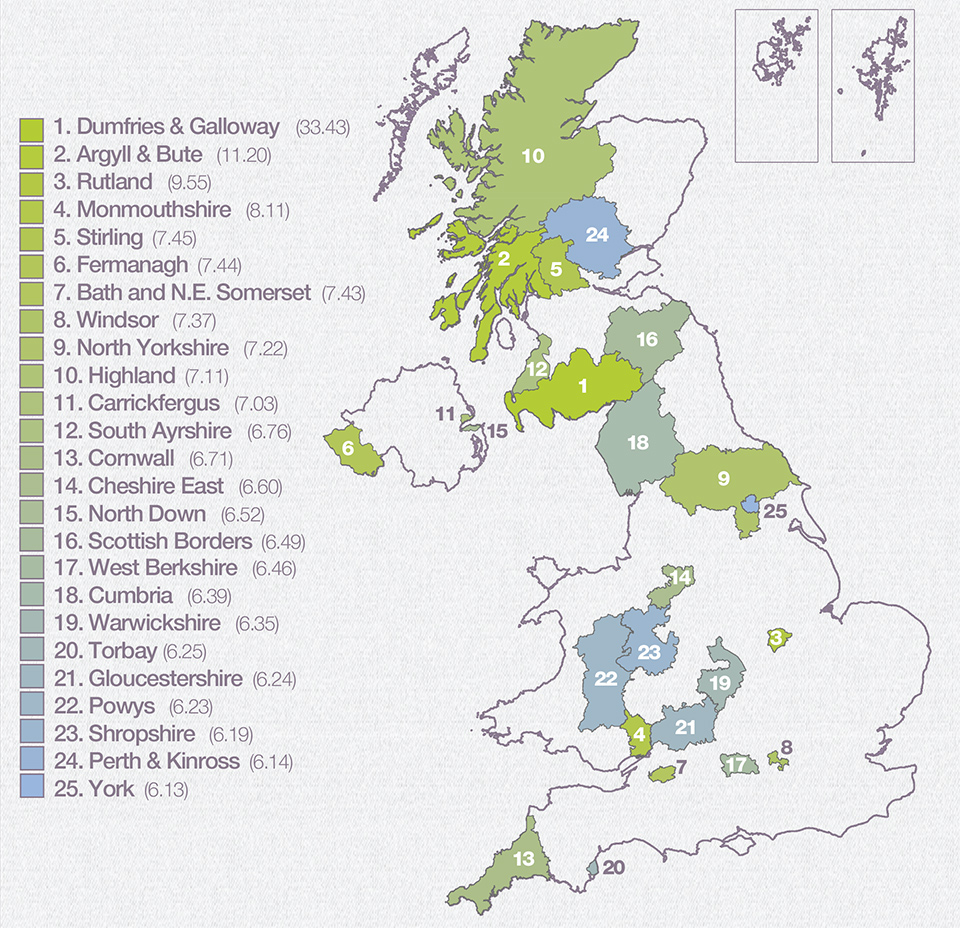 Dumfries and Galloway was by far the most popular local authority in which to marry in the whole of the UK in terms of marriages per head of population. This suggests that it is a popular destination for couples travelling from outside the region.

Once again, we go into detail about the possible causes for this in our Weddings in Scotland 2014 infographic.

As a quick summary, this is due to the popularity of Gretna Green, known in the past as a destination for English couples looking to hold ‘runaway weddings’, away from the more strict laws in place in England.

The stunning Argyll and Bute region is a popular destination for those living in the populous Glasgow and Edinburgh, as the region is relatively accessible from those cities.

Rutland, located in the Midlands, and adjacent to the populous Leicestershire, Lincolnshire and Northamptonshire, has the highest number of marriages per population in England. Rutland Water is a beautiful region within the tiny county that is clearly popular for weddings.

The Most Popular Regions to Marry in The UK

Scotland is the most popular region (country) within the UK in terms of its population for marriages, quite an interesting feat considering 87% of weddings took place in England and Wales in 2012. This is followed closely by the South West of England.

Both are sparsely populated regions with grand swathes of beautiful countryside, making them popular destinations to those living outside (in more urban areas for example).
When?

Saturday is by far the most popular day of the week to marry, with 54% of all weddings taking place on this day during 2011. This comes as no surprise considering the day’s suitability to the 9-5 routine.

Tuesday is the least popular day to wed in the UK, at 4%, with Wednesday close behind (5%). This is thanks to these two days’ being the furthest away from the weekend.

The months of May through September constitute the peak season in the UK with August being the singularly most popular month to wed, at 40,255 (15%) marriages. 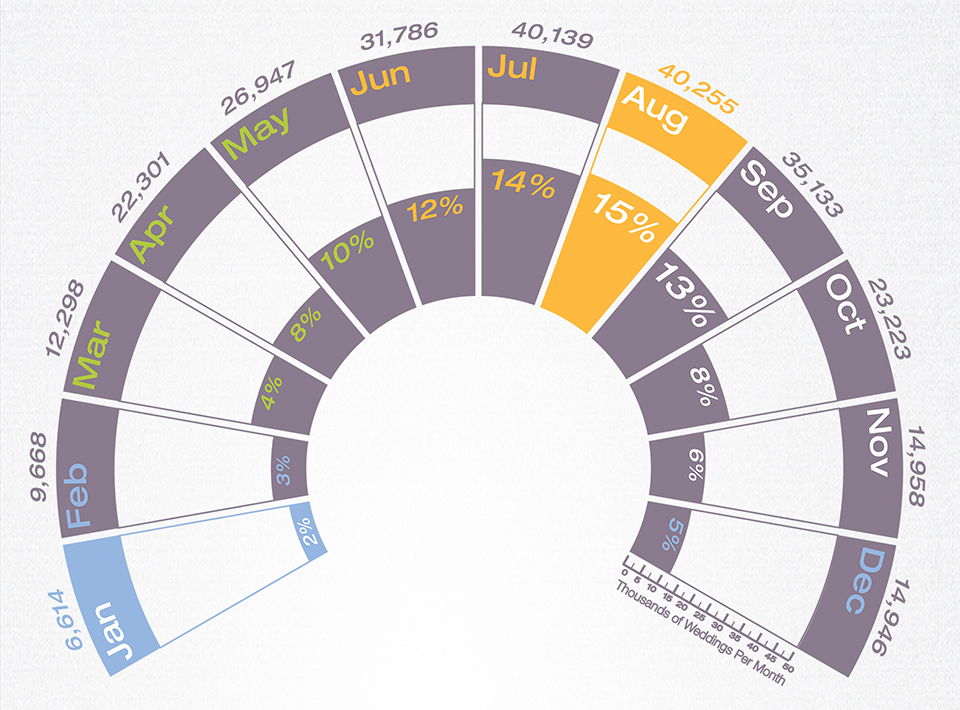 As you can see, men in the UK tend to marry at an older age to women, with a large 2.4 year age gap.

Here we look at the different type of wedding ceremony that take place in the UK. There are two main types of ceremony:

As you can see, 67% of all marriages in the UK were conducted as registered civil ceremonies – a clear reflection of the UK’s secular orientation. This means that religious ceremonies only have 33% of the share.

In the graph below, we’ve grouped together the Church of England, Church of Scotland and Church of Ireland (in Northern Ireland) marriages which took place in 2011. As you can see, ceremonies with these larger, Protestant Christian groups are still the dominant form of religious ceremony in the UK.

Scotland is worthy of its own mention here as it treats types of weddings differently to the rest of the UK. In terms of marriages ceremonies, Scotland categorises ‘belief systems’ such as Humanism as religious.

In Scotland, temporary authorisation can be granted to an individual affiliated with a recognised religious group or belief system (Roman Catholic Church or Humanist Society for example). This also contributes to the relatively large 5% ‘other’ weddings we see in the UK pie chart.

The ‘Other’ count is very large in Ireland too (25% in 2013), contributing to this the wider variety of religious ceremonies which take place in Ireland on a yearly basis, besides Catholic, Church of Ireland and civil ceremonies. This includes a large number of Presbyterian and Methodist ceremonies, and ‘other denominations’.

Of course the UK’s marriage statistics are influenced by different countries in the UK. Although England and Wales contributed 87% of all weddings in 2012, it doesn’t paint the whole picture, as per head of population, Scotland is actually the most popular place to marry in the UK.

Marriage ceremony types vary quite considerably from country to country in the UK, with Scotland hosting a great deal of humanist weddings, Northern Ireland a higher proportion of religious weddings and England and Wales many civil ceremonies.

On a positive final note, marriages are on the up in the UK!

Please Share! If you liked some of the statistics and information that we’ve shared with you, then please help spread the word. You can view the full infographic here, or click one of the social media icons.