Fresh Off The Press

Here at Wedding Secret HQ we’ve been working hard on deciphering the latest statistics for marriages in England. We’re happy to announce the release of a brand new infographic which summarises the emerging and interesting patterns of the results. Below you will find the infographic, along with an informative breakdown of what everything means.

As you are about to discover, all sorts of elements have affected the number of marriages over the years.

We have gathered statistics – courtesy of the ONS – which display data as recent as 2011. 2011 is the last statistical year, and further information (such as 2012 and 2013) have not been made available at this time. There are a number of factors that may influence the patterns highlighted, including overall increase in population, immigration numbers and more. Many speculations have been made, and are not necessarily a 100% accurate reflection of the reasons behind these emerging patterns.

Marriages are on the increase (a 6.6% increase between 2009 and 2011)* in recent years – compared to the recent overall trend (which is downward)

The late 1960s saw the lowest average marriage age of both men and women in the entirety of England’s recorded history.

The increasing secularisation of England’s society is clearly demonstrated in the ratio of religious to civil ceremony types. 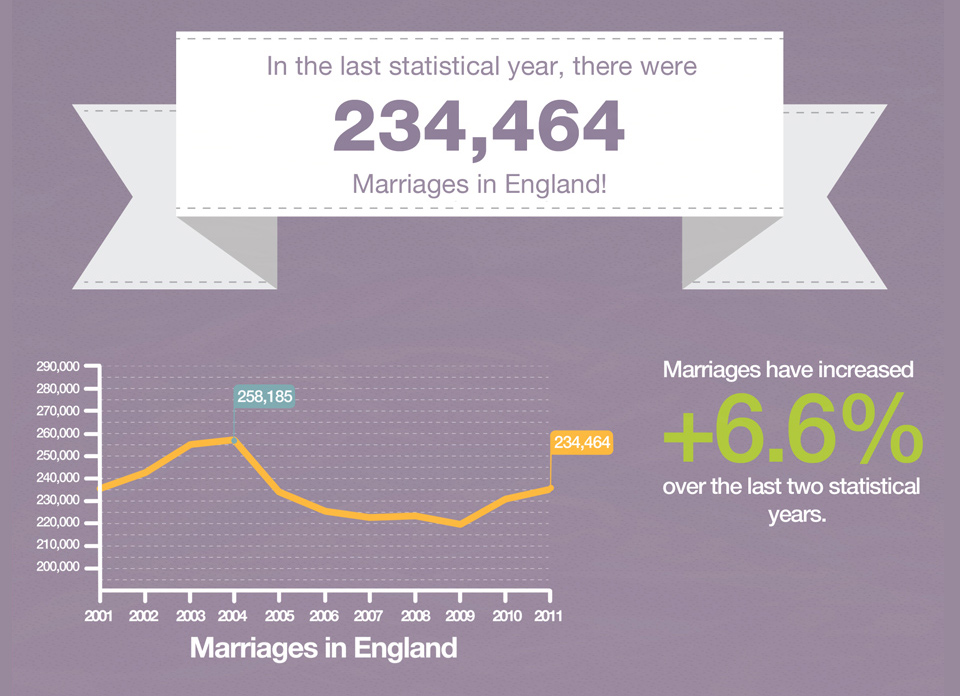 As demonstrated by the graph above, in the last two statistical years, the number of marriages in England has increased, bucking the gradual overall downhill trend that has been occurring since the 1970s.

The 100 Year Marriage Trend in England and Wales

The fluctuations in marriages in England and Wales over the last 100 years truly reflect the socio-economic story of England in the last century. 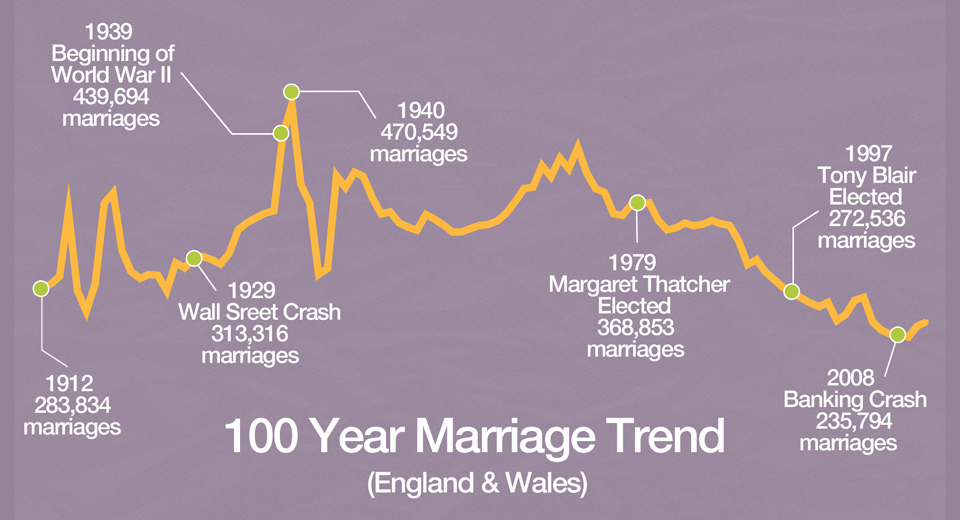 Prior to the events of World War II, there seemed to be a significant increase in the number of marriages, beginning in 1934 (one year after Adolf Hitler became the Chancellor of Germany in 1933).

World War II began in 1939, coinciding with a large increase in the number of marriages (some 77,926 more than the year before), which peaked in 1940 with 470,549 marriages taking place in England and Wales. The events of the blitz took place between 1940 and 1941, a likely cause for the sudden decline in marriages post 1940, along with the peak of the war until its end in 1945.

We see another spike in 1945 – with VE Day and the general ending of the war the likely culprit here.

The post-war years see an overall decline until 1959, where the 60s then bring an increase in marriages, which then separately peaked in 1968, 1970 and 1972. The cause of this is likely to be the post-war pinnacle of marriages between 1947 and 1949, the period when most of the UK’s ‘baby boomers’ were born!

Consider the average age for men marrying in 1968 was around 24, and women around 22, and these figures are in perfect alignment.

On the micro-scale, there are likely to be a great number more factors affecting the number of marriages as seen here – such as population etc.

To The Modern Day

The overall decline of marriages however, could be related to the gradual secularisation of the UK, amongst other factors.

Above we have summarised during which months marriages most commonly take place, along with the most popular days of the week.

Unsurprisingly, Saturdays are the most popular day of the week to get married – with 57.5% of the weekly share.

This is followed by Friday, Sunday and finally: Tuesday is the least popular day to wed. 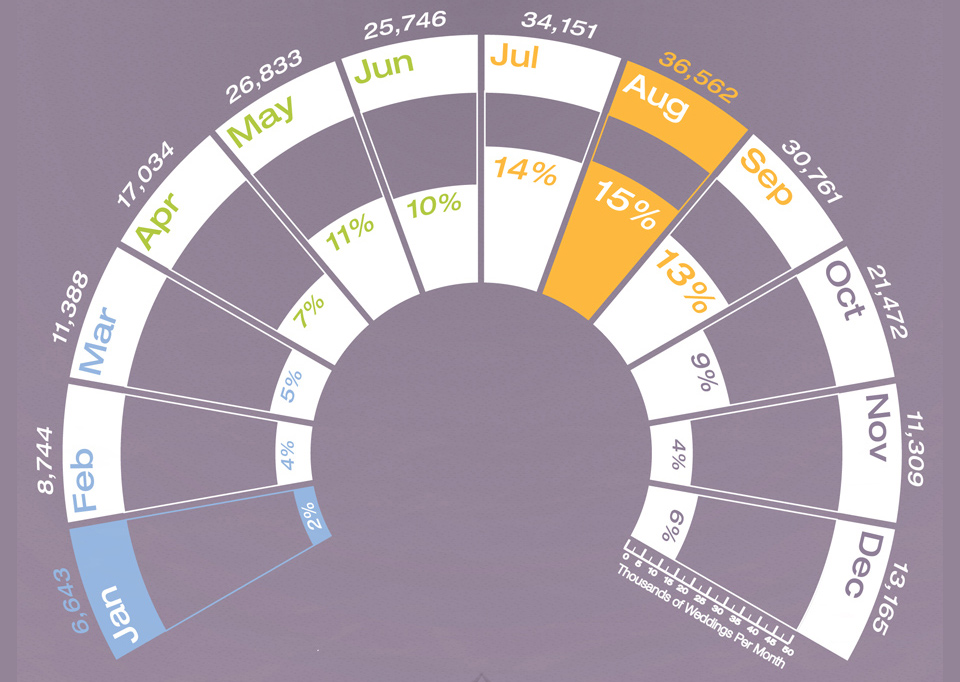 The peak marriage season is the summer months of July through September, with 42% of the yearly share. Of the spring months of March through May, the latter leads the way with 11% of the year’s weddings.

Winter marriages (between November and February) peak in December, which may be thanks to the popularity of near-Christmas and New Year’s Eve weddings.

January is the least popular time of year to get married – the weather, post-Christmas blues and lack of funds perhaps to blame here. 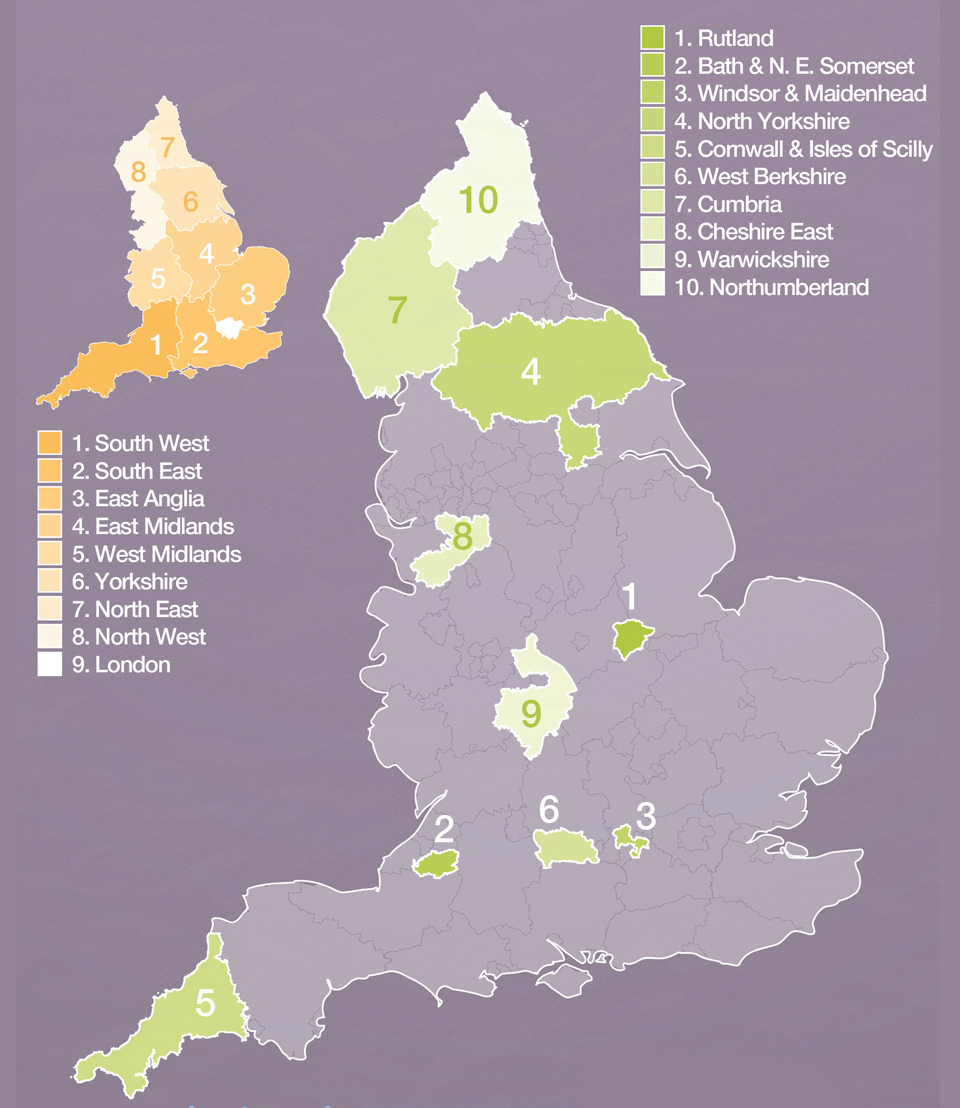 As demonstrated above, the most popular county to get married in in the UK is actually Rutland. Located in the midlands, and adjacent to Leicestershire, Lincolnshire and Northamptonshire, this small county has the highest number of weddings per capita.

This suggests that people are visiting Rutland from outside the county, making it a popular destination wedding location.

In a close second place, Bath and its surrounding region is also very popular for weddings considering its population. It’s quite understandable that a historic and beautiful Georgian-era city surrounded by countryside would be a popular wedding destination.

By the ‘per capita’ system, Sandwell, a district (not county) in Birmingham, is the least popular to marry within.

The most popular region in the UK to get married in is the South West, per capita. This includes the counties of Gloucestershire, Somerset, Wiltshire and Dorset and all counties west of this.

We can once again only speculate as to why the South West is so popular for marriages. Factors such as a slightly more favourable climate, its status as a tourist destination, and its many areas of natural beauty may have influence.

The latest statistics for marriages in England and Wales show that currently, the average age that men get married is 33.2 years old, and women 30.9. A 2-3 year age gap has remained relatively consistent over the last 100 years – apart from 1915 (which marks the end of World War One), where the average age difference dipped down to 1.7 years. 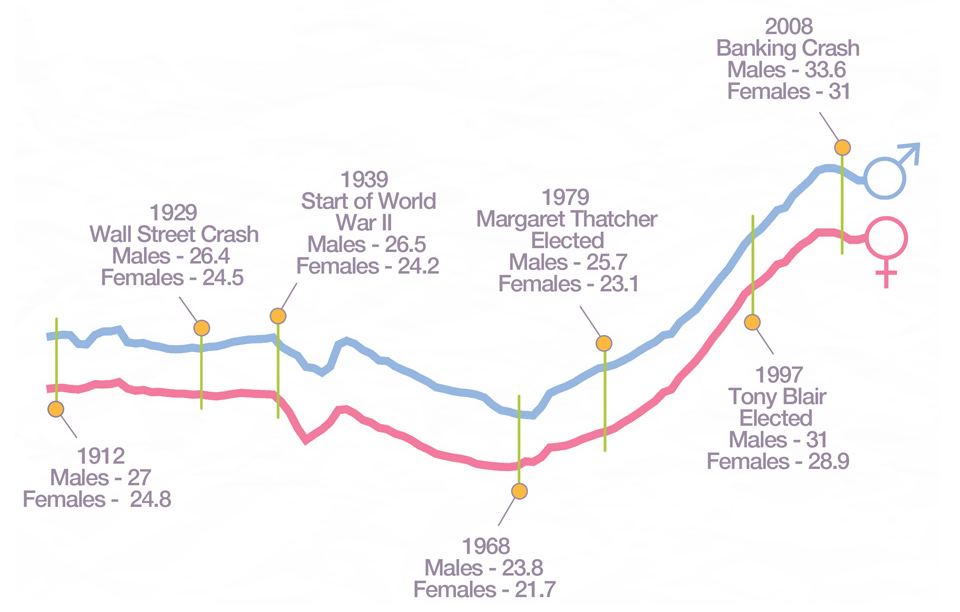 World War I saw small effects in the average age of men and women marrying. At the start of the war, during 1914 and 1915 we see a small decrease in the age of men marrying, where women’s age at marriage doesn’t seem to be affected – this may be thanks to the fact that a huge percentage of Britain’s male population had been enlisted in the army.

There are a number of factors that could have influenced this dip once again. Britain’s economy was booming in the 60s, meaning that young people, for once, had enough money to settle down and afford to get married (their parents could also afford to contribute more to the wedding proceedings). There were also a great number of young people around at this period in time to accentuate the results– the Baby Boomer generation.

Other influences could have included better education and secularisation, increased rights for women and even more sexual freedom quite commonly associated with this period in history.

To The Modern Day

After the late 60s, you can see that the average ages of people marrying steadily rises until it plateaus just under 34 years old in 2006 and 2007.

Since this peak, the trend seems to point at the average age of marriage decreasing. Why this is isn’t clear, and if the average age will continue to drop – we can only speculate. 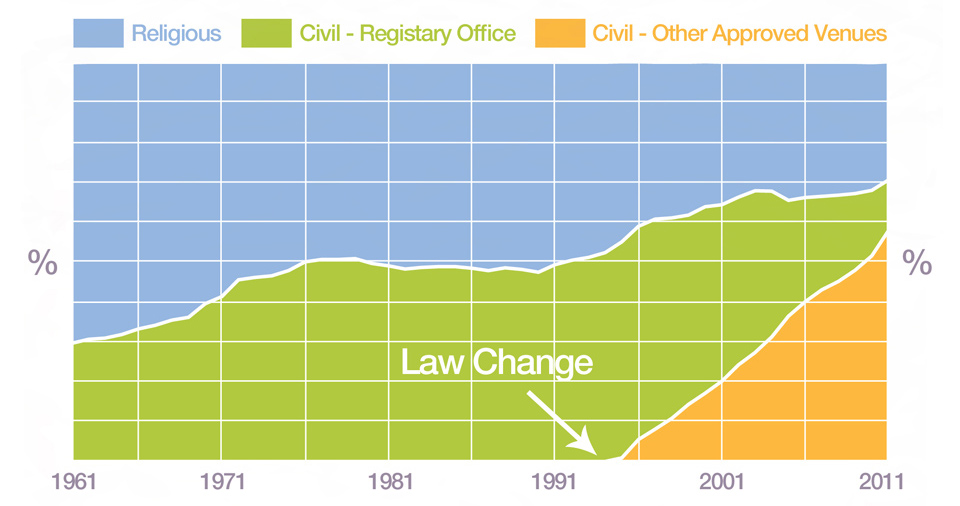 The ‘area graph’ above (below the pie chart) effectively displays the share of religious, register office, and approved venue marriages over the last 50 statistical years.

In 1962, 70.3% of marriages that took place were in a religious context or building – this includes Church of England, Catholic, Jewish, Islamic marriages and more. Whereas civil marriages (which had to take place in register offices before 1995) only had 29.6% of the share.

In 1994, an act was passed allowing certain approved premises to host civil ceremonies (non-religious). The following year, the law came into effect, and around 1% of all couples marrying in England that year decided to take advantage. Despite this a few years after 1995, where knowledge of the law spread, and venues took up licenses, the number of marriages taking place in approved premises has consistently risen until today! 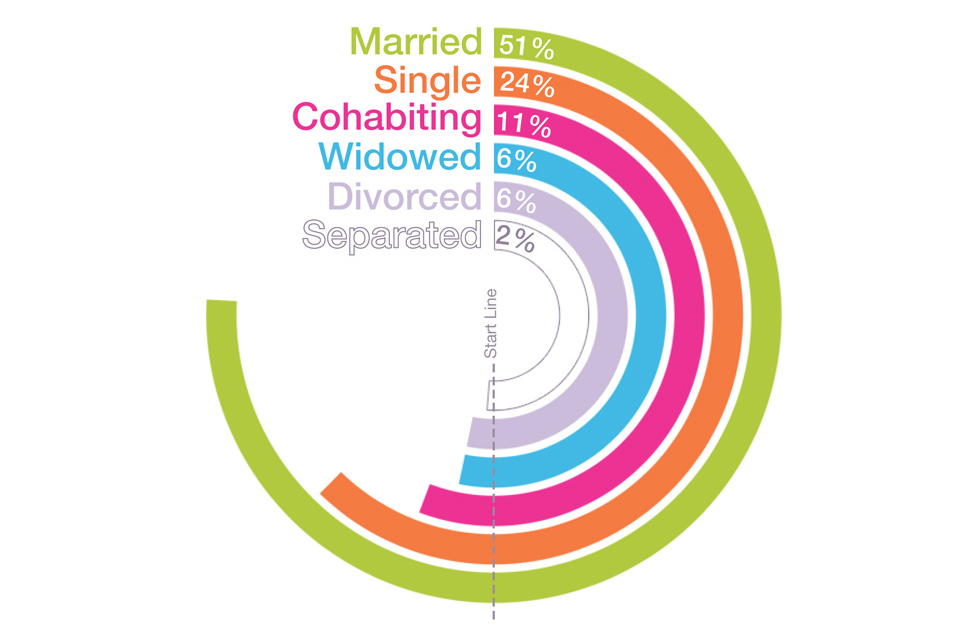 The circle chart above shows that of all people over the age of 16 in the UK, 51% are married. The number of widowed and divorced couples approximately match. ‘Cohabitation’ is the fastest growing relationship status, with 11% of all couples in the UK registered as cohabiting in 2011. This is a figure that has approximately doubled since 1996.

The numbers of weddings, their types and the ages at which couples carry them out well and truly tell the story of the last 100 years. With the world wars being the major players in population, marriages and birth, their effects can be felt decades on, and as recently as the 2000s!

Please Share! If you liked some of the statistics and information that we’ve shared with you, then please help spread the word. You can view the full infographic here, or click one of the social media icons above.